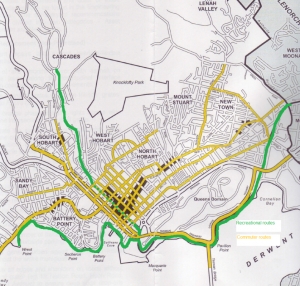 July 2010 - Argyle St bicycle parking cage July 2010. Workers in the city looking for a safe and secure location to park their bike will be able to use the new bicycle parking cage in the Argyle St carpark. Access is via an electronic swipe card and the cage will be under CCTV surveillance. The facility will be accessible during the normal operating hours of the Argyle Street Car Park. Lockers will be provided within the facility and public toilets are located almost immediately adjacent to the facility access. This secure bicycle facility will be a membership based, fee for service facility. The fee for a 1 year (52 week) membership of the facility will be $50. A refundable deposit ($50) for the electronic swipe card will also be required. Membership applications are available from the Hobart City Council Customer Service Centre or Hobart Council website.

Dec 2009 - Hobart installs first permanent bike counter. The counter has been embedded in the intercity cycleway at the Hobart Cenotaph end and will be counting cyclists 24 hrs a day / 7 days a week.

Dec 2009. Bicycle parking for local shopping areas in Hobart. Hobart City Council has carried out consultation with shop owners and is intending to install bicycle parking rails at a number of local shops in Hobart including Raw and Lipscombe Larder in Sandy Bay, Hill Stshops in West Hobart and shopping area at Cross St/New Town Rdin New Town. This is good news for people making quick trips to their local shop by bike with the provision of secure bike parking at the front door. Additional bike parking will be installed at other locations in the next round.

Feb 2007. Trial Fern Tree Bus-Bike Shuttle Service -Hobart City Council is subsidising a trial of a Fern Tree Bus-bike service to transport cyclists uphill from Hobart to Fern Tree. It starts on Tuesday 6th of Feb and will be run for 10 weeks until Thursday 12 April by Island Cycle Tours. The service will run twice a week on Tuesdays and Thursdays, departing from the Tasmanian Tours Information Centre (corner of Davey and Elizabeth Sts) at 5.40pm.
Payment is either up-front, $70 for a 10 week pass (2 trips / week @ $3.50 per trip) or $4.00 for casual use. Payment for both the pass and daily ticket is made on the bus to Island Cycle Tours, who are running the service. They will accept credit card payment for the 10 week pass (both fares are cheaper than a return trip by Metro bus).
People can request stops in South Hobart (e.g. Grayling Ave), top of Strickland Ave, Chimney Pot Hill Rd and Fern Tree. We may also be able to negotiate a drop-off in Ridgeway on the way back to town. Bikes are carried in an enclosed trailer behind a mini-bus and both the front and rear wheels are secure, so risk of scratches or damage to bike s is minimised. Bike seats may need to be lowered to fit in the trailer. For further information contact Island Cycle Tours Ph 0400224942. The success of the trial will determine if an on-going regluar service is viable, so it is up to you to show your support !

Feb 2006. There are several projects to be carried out in the 2006/07 financial year. These include:

Sustainable Transport Strategy 2009
Dec 2009. At its Monday 14 December 2009 Council meeting a Sustainable Transport Strategy was adopted in principle. This strategy outlines a vision for the future transport sustainability of urban Greater Hobart and beyond. The Council welcomes public comment on the document and will be running public displays at the Hobart Council Centre during January and February 2010 along with special attended displays in Waterside Pavilion, Mawson Place.

Hobart Principle Bicycle Network 2007
Aug 07. The Draft Principal Bicycle Network has been identified by the Hobart City Council Bicycle Advisory Committee to assist Council in providing improved cycling facilities for Hobart residents and visitors. This is in line with the Hobart 2025 Vision to create a city that is: “Highly accessible through efficient transport options.”

The intention of the Draft Principal Bicycle Network is to identify the arterial corridors, or the initial ‘spine” routes for cyclists that cater for commuting, recreational and training cyclists. The intention has not been to identify every street or area where cycling paths and facilities could be located. Routes identified in the Principle Bicycle Network include:
- Argyle and Campbell Streets
- Davey and Macquarie Streets
- Sandy Bay Rd

After the Principal Bicycle Network has been established the aim of the Hobart City Council Bicycle Advisory Committee will be to identify a local bicycle network within suburbs to further enhance safer cycling options. The Hobart City Council will, over time, develop concept designs and undertake individual consultation with stakeholders for all the identified arterial routes.

In 1997 Hobart Bike Plan was developed with input from a Council Steering Committee chaired by Alderman Jeff Briscoe. The objectives of the study were to review the previous 1984 study, estimate current levels of cycle useage and propose strategies to better support existing cyclists and encourage and increase in cycling numbers.

Bike Projects identified in the Hobart Bike Plan include: