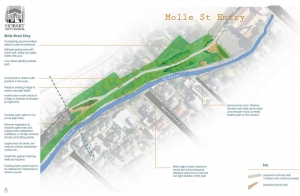 Strickland Ave, the Hobart Rivulet Track and Collins St make a direct and convenient connection to the Hobart CBD. Improvements on the Rivulet Track to make it an all-weather facility will enhance the route but the one-way block on Collins St between Murray and Elizabeth is a significant blockage to bicycle movement around the CBD. 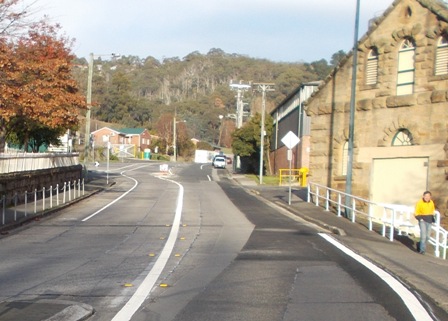 July 2014. Hobart City Council has installed a pedestrian refuge on Strickland Ave at Cascade Brewery and included an uphill bike lane as part of the project. This short link provides a connection for bicycle riders using the Hobart Rivulet path from the Cascade Gardens to the Old Farm Road turnoff. Green surface treatments will be provided across the Cascade Brewery’s Visitor Centre Car park entrance and the breweries warehouse entrance to assist in highlighting the presence of bicycle riders, especially to tourists. The project was funded through the State Government's Vulnerable Road Users Program. A photo showing the coloured treatment will be posted shortly.

Sept 2016. The new exposed aggregate concrete path is finally open for use. An unnecessary chicane gate has been installed on the path near the Molle St carpark entrance at the insistance of the landowner. Council’s Open Space Group are working with the owner of the Molle St carpark to resolve uncertainties around the formalisation of pedestrian and cycling access through the site to the Hobart Rivulet Park. 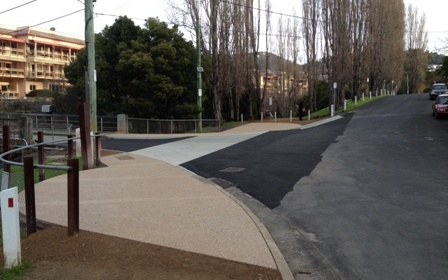 Aug 2016. Work is almost complete on the crossing on the Hobart Rivulet Track at Gore St. A raised crossing has been installed to improve the crossing and slow traffic.

Nov 2015. To improve the crossing of Gore St/McKellar St on the Hobart Rivulet Track Council has received Blackspot funding to improve the intersection. They are developing plans to install a speed cushion to slow motor vehicle speeds at the crossing and construct a new footpath and kerb.

Nov 2015. The  development application for the Hobart Rivulet Park Shared Path – Molle Street – McKellar Street has been lodged. The application is for a 3 metre wide concrete (exposed aggregate) path following the current alignment of the Rivulet track .  It includes lighting and park furniture. Construction of the shared path has been programmed for March 2016 if the DA is approved.

June 2015. Hobart City Council has approved construction of the Molle Street – McKellar Street section of the Hobart Rivulet Park Shared Path as a single, 3.0m wide concrete shared use track that follows the current track alignment. The concrete surface will address the slippery muddy condition of the track in this section. Plans can be viewed on the Hobart Council website.

4 Dec 2014. A report was presented to the Parks and Customer Services Committee outlining the results of the community consultation and recommending the following:

7 Oct 2014. Hobart City Council is seeking feedback on the proposal to replace the gravel track with an all-weather sealed surface. Click here to provide comments. A successful grant from the Trails and Bikeways Program is funding some of the improvements. Last winter sections became wet and boggy and the lack of sunlight prevented it from drying out. The muddy surface makes it unpleasant for people using prams, on bicycles, mobility scooters or simply walking and combined with the slope from McKellar St, the slipperiness has safety issues for people riding or walking.

The proposed works will include:

Some people have concerns about speeding cyclists using the track and are opposed to sealing sections but our counts data shows that Macquarie St is the preferred route for high-intensity riders as it is faster and more direct. 97 people were counted riding down Macquarie St on 18/3/14 between 7am and 9am. In contrast the Hobart Rivulet Track attracts a different kind of bike rider - more risk adverse, lower intensity (often children) and more likely to be wearing city clothes than lycra. Counts on 18/3/14 recorded 71 people riding on the track (25% less than using Macquarie St). Strava maps also show that high-intensity riders prefer Macquarie St over the Rivulet Track/Collins St route.

As a comparison, the Clarence Foreshore Trail also follows a waterway, passes through parkland and is located adjacent to residential areas. It attracts a high volume of use and is shared with people walking, riding bikes and walking dogs on lead. Clarence Council recently sealed the gravel section around Bellerive Bluff because of the complaints of muddiness and slipperiness in winter and have been working on sealing other sections over the past 5 years to improve sight lines, harden the surface and widen the path. However commuter counts show that during the 7am to 9am period there are twice as many bike riders on Clarence St (that runs parallel) than use the Clarence Foreshore Trail. This is similar to the Macquarie/Rivulet Track comparison.

Track surface to be upgraded

Aug 2013. HCC is applying for funds to concrete the first section of the Rivulet Track at the Molle St end. The track is muddy and slippery in winter and rarely sees any sun to help dry the surface.

Missing middle sections to be completed

Apr 2012. Council has commenced work on two sections of the Hobart Rivulet Track which will complete missing sections on this important route connecting South Hobart to the Hobart CBD. Hobart's first contra-flow bicycle lane (which allows bike riders to travel in the opposite direction on a one-way street) is being installed on Degraves St. The concept plan shows how it will look, with only a couple of minor changes.
The former Boags Brewery site (now C3 Church) which prevented access along the rivulet and required a steep detour over the hill will soon have a pathway installed along the rivulet. Hobart City Council purchased a strip of land along the rivulet and public access will soon be available.

Feb 2012. As part of preparation work for constructing a new walking and cycling track along the missing section of the Hobart Rivulet Track, willows have been removed from the site adjacent to the C3 Church and old buildings demolished. See The Mercury website for more.


The Draft Hobart Rivulet Park Strategic Master Plan Public Exhibition, 2 - 29 July 2011
July 2011. If you ride the Hobart Rivulet Track you can make comment on the plan during July. The Plan will guide decisions concerning the management and development of parkland and open space along the Hobart Rivulet extending from the River Derwent through to Wellington Park with the key focus extending from Molle Street. See Hobart Council website for more information.

July 2010. Works have commenced on the improved crossing of Molle St for Rivulet Track users which includes a bike lane in the design. It's a good example of incorporating a bicycle facility as part of another project.

Jan 2010. Hobart Council will be undertaking a masterplan of the Hobart Rivulet Linear Park which will also include the multi-user track. Council has finalised arrangements for land purchase of the former Boags Brewery site at Anglesea St which will provide a continuation of the track along the rivulet for walking and cycling, avoiding the existing steep bypass over the hill. The land is situated on the northern side of the Rivulet between Anglesea Street and Council owned parkland. It comprises approximately 0.7 hectares and is wide enough to allow for a separated bikeway and walkway. The Council will now begin the planning process to develop the land for public access and recreation. "Part of the planning process will involve community consultation with nearby residents and the broader community, together with the removal of a number of sheds as well as a building,” said the Lord Mayor. In addition, the crossing of Molle St will be improved through the installation of kerb outstands to reduce the crossing distance of the roadway, a reduction in motor vehicle lanes from 3 to 2 and a bike lane along a section of Molle St. For more see Hobart Council website.