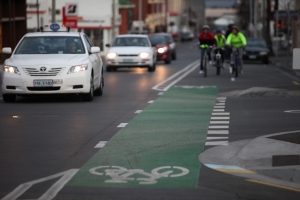 The Argyle and Campbell St bike lanes make up a section of an arterial bike route from Lenah Valley to the Hobart CBD. The middle section between Lewis St in North Hobart to Brisbane St has been constructed. The last 6 blocks between Brisbane St and the Intecity Cycleway on the waterfront are missing, as is a connector along Burnett St linking Argyle St to Campbell St.

The idea for the bike lanes was first raised at a Hobart Bicycle Committee meeting over 3 years ago so it's exciting to finally see the paint go down on the road. Argyle and Campbell Streets were chosen for the first lanes as they had adequate width to install the bike lanes without removing parking or travel lanes. It was a good trial project for the traffic engineers and designers who haven't done this sort of treatment before. Hobart Council has produced a Frequently Asked Questions Fact Sheet about the bike lanes, including the reasons why the Campbell St bike lane is on the right hand side of the road.

Hobart Council carried out extensive traffic surveys of the routes beforehand and found they could remove a right turn lane at Burnett St without impacting on traffic flow. The bike lanes also improve consistency for drivers along Argyle St by providing two continuous travel lanes and eliminating the merging that used to occur at the intersections.

It's the first time green lanes have been used in Tasmania (they are located at potential conflict points where motor vehicles have to cross the bike lanes, usually at intersections) and it's Hobart's first bike lane on an arterial road. It is hopefully the beginning of a network of bike lanes across the Hobart region. For more on the bike lanes see Hobart Council website.

Cyclists were already using Argyle St and Campbell St and the new bike lanes will increase the safety for them and make it more attractive for more people to cycle. Because they're new, many people won't know the road rules around bike lanes. For road rules see Rules and Guidelines webpage. The Sharing the Road in Tasmania flyer outlines a summary of rules relating to bike lanes and riding bikes.

One of the reasons Argyle St was chosen for bike lanes was the generous width of the road space which enabled Hobart Council staff to come up with a high quality design which includes green lanes at intersections and painted chevron barriers to increase separation between cyclists and motor vehicles.

CyclingSouth would like to thank DIER and Hobart Council for modifying the Blackspot plans to include bike lanes. These lanes are the first step in developing a network of bike routes in Hobart.