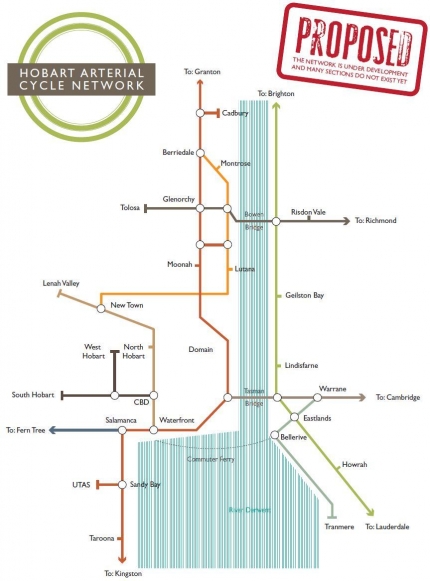 Feb 2023. The State Government has announced round 1 of funding for the Greater Hobart Cycling Plan, which will provide $2 million towards the delivery of cycling infrastructure.

The Greater Hobart Cycling Plan will guide the joint planning and investment of the Greater Hobart councils and the Tasmanian Government, to form an interconnected network of cycling paths across Greater Hobart, encouraging increased usage and enhancing active transport options across the region. Research has shown that around 8% of the population will tolerate interactions with traffic when cycling and an additional 60% of the population are willing to ride if the level of traffic stress is reduced. This can only be chieved by adopting a Safe Systems Approach to develop a connected network of low-stress and inclusive routes that cater for All Ages and Abilities (AAA).

It provides genuine transport choice to a wide range of people including children, older people and inexperienced riders to travel to work, school and move around their communities without being reliant on car travel. These AAA routes will complement existing and proposed cycling infrastructure identified in other adopted cycling plans by recognising a need for higher quality infrastructure on existing routes and the future network.

The Greater Hobart Cycling Plan aims to provide infrastructure that is safe, convenient and direct that comprises of:
• Local Street bikeway – Vehicle speeds should not exceed 30km p/h and traffic volumes should be below 500 vehicles per day. Traffic speeds over 30km p/h significantly increase the probability of fatal injury in the event of a crash (see table) so on higher speed roads separation from motor vehicles is desired.
• Protected bike lane – Provides physical barrier separation from motor vehicles on higher speeds and traffic volume roads, as well as separation from pedestrians particularly in locations where foot traffic is high. The facility should provide adequate width for comfortable passing and accommodate all types of wheeled active transportation such as e-scooters and cargo bikes.
• Off-road cycleway – This is shared with pedestrians and needs to be a minimum of 3.0m wide. Road crossings need careful consideration and grades should be minimised as much as possible

Sept 2022. As part of the strategic direction of the 30-year Greater Hobart Plan, work is underway through the Hobart City Deal on an agreed Greater Hobart Commuter Cycling Network. The plan aims to develop All Ages and Abilities (AAA) infrastructure - separated cycle lanes, shared paths and traffic-calmed local streets. Each Council is already pursuing a range of active transport initiatives and are awaiting sign-off on the plan and funding promised by the Tasmanian Government.

The plan will recognise the need for AAA infrastructure as part of a primary network of commuter routes. The routes have been identified through reviewing the 2009 Hobart Regional Arterial Bicycle Network Plan (pictured left) and council cycling and transport strategies.

The State Government has promised funding of $2M for cycling infrastructure which is essential for helping state and local government meet some of the objectives of the Hobart City Deal. The 30-year Hobart plan recognises that "walking and cycling should be promoted as viable and desirable forms of transport across Greater Hobart. The main challenges are to generate sufficient behavioural change to make a difference and to undertake the necessary capital works to increase the opportunities or attractiveness of active transport. Some areas are relatively poorly serviced in this regard."

Multiple transport strategies including the RACT Mobility Vision, City of Hobart Transport Strategy and the State Government Hobart Transport Vision all identified the need for separated cycleways in the Hobart CBD. The Tasmanian Bicycle Council identified a core loop of bi-directional separated cycleways on Collins, Campbell, Harrington and Melville St. The plan can be viewed on the Tasmanian Bicycle Council website.

The Hobart Regional Arterial Bicycle Network Plan (2009) identifies a desired logical network of arterial bike routes across the Greater Hobart Area. Sections of the network exist but there is still a long way to go before interconnected routes comprising of bike lanes and multi-user paths become a reality. We want to make it easy and convenient for more people to ride bikes more often for health, social and economic benefits and a quality cycling network is needed to achieve this.

Cycling South is the regional body coordinating the implementation of the bike network in conjunction with the member Councils of Brighton, Clarence, Glenorchy, Hobart and Kingborough. We will continue to work with and lobby state government to see the vision for an integrated transport and recreational cycling network realised.

The purpose of the plan is to:

A copy of the plan can be downloaded at the bottom of this page.

State Government's Principle Urban Cycling Network
In 2010 the State Government released its Urban Passenger Transport Framework which included a Walking and Cycling Strategy. In July 2011 DIER invited stakeholders to be part of a session to identify priorities for cycling arterial projects. The Principal Urban Cycling Network was identified, which closely resembles the the Hobart Regional Arterial Bicycle Network Plan, but is an important milestone whereby DIER recognises bicycles as part of their transport responsbilities for the first time. To view the maps of the PUCN in each major population centre in Tasmania see State Growth website. The next step is for DIER to establish a regular, ongoing funding program to implement projects identified in the PUCN.

In 2008 the Premier, David Bartlett, announced the establishment of the Trails and Bikeways Program, managed through the Department of Sport and Recreation. The program provided 50% matching funding to local government for constructing trails, cycleways and bicycle lanes. The funding has been significant in progressing the development of the Hobart Arterial Bicycle Network. Projects funded with contribution from Sport & Recreation Trails and Bikeway Program in Southern Tasmania are listed below:


Cycling for Active Transport Local Infrastructure Development Fund
The fund was established in 2011 by the Minister for Sustainable Transport, Nick McKim, to assist in the planning of large scale projects and implementation of smaller projects that enable and promote bike riding. The program ceased in 2013. Projects funded in Southern Tasmania under this program are listed below:

In 2008 the plan was been developed through a working group made up of representatives from Hobart, Clarence, Glenorchy, Kingborough and Brighton Councils as well as a representative from the Department of Infrastructure, Energy and Resources. A funding grant was provided by the Department of the Environment, Water, Heritage and the Arts to assist with the development of the plan. CyclingSouth prepared the document with reference to the municipal bicycle plans of each Council and in consultation with the working group. Public consultation was carried out in 2008 and feedback was collated and incorporated into the final document - The Hobart Regional Arterial Bicycle Network Plan 2009.