May 2021. a total of $55 million ($44 million from the Federal Infrastructure Fund and $11 million from State Government) has been committed to the dupliction of Rokeby Road between Pass Road and the Police Academy roundabout, which will include a shared pathway and wide sealed shoulders for cycling.  Planning work is underway and construction is due to commence in 2025.

Feb 2021. The Department of State Growth has released a plan for an upgrade of the Rokeby Road corridor, including a bypass of Rokeby Village. The report made the following recommendations for active transport -

To improve active transport uptake, it is recommended that the shared path constructed at Tollard Drive be continued along the Corridor. This would improve the uptake of cycling by inexperienced and less confident cyclists. The suggested route for the shared path would be:

The proposed shared path route aligns with Clarence City Council plans to construct an unsealed walking track between Oakdowns Parade and Acton Road. Ultimately Council’s unsealed walking track would be upgraded to a wider shared path with an all-weather surface at the time the section between Oakdowns Parade and Acton Road is duplicated. In addition to the construction of a new shared path, existing footpaths are proposed to be connected to the new signalised pedestrian crossings to improve pedestrian connectivity. To accommodate experienced cyclists, who are unlikely to use a shared path, it is recommended that sealed shoulders suitable for use by cyclists are included along the full length of the Corridor. 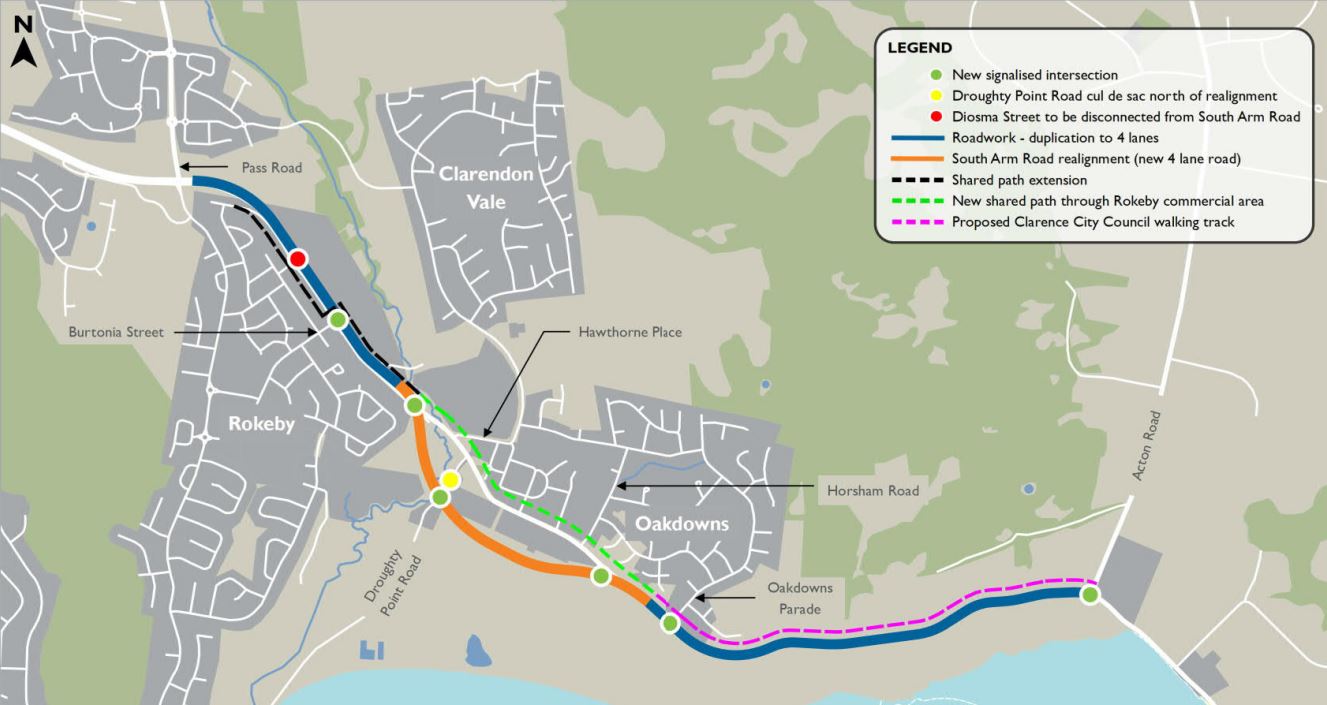 Mar 2020. Clarence City Council recently installed an upgraded concrete pathway between Lauderdale Primary School and Ringwood Road as part of improvements to make active travel to school safer and easier. The concrete pathway is wider and smoother than the old hotmix path, making it suitable for scooters as well as bicycles and allows people to walk side by side without completly blocking the path. Armco railing was installed alongside the path to provide greater protection from traffic at locations where it didn't interfere with driveways. 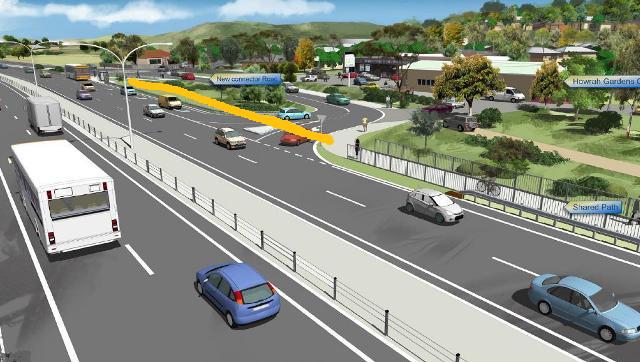 May 2015. Work is underway on the next stage of the road upgrade which will include a 3.0m wide concrete shared path alongside the new road to replace the old hotmix path. In addition the shared path will be extended between Howrah Gardens Centre and Oceana Drive so the old detour around Buckingham Drive will no longer be necessary.

The original design for the new works showed the shared path following the new section of Buckingham Drive (that connects to Howrah Gardens Centre). This inconvenient alignment would have required a crossing of the Howrah Gardens Centre entry/exit driveway (a potential conflict point) as well as an additional road crossing point at a roundabout further along. The orange line on the diagram (right) shows the new alignment with a simpler crossing point where the sight lines are good and the path alignment is more direct.

The missing section of pathway near the Howrah Garden Centre (see photos) will be constructed as part of the road upgrade project.

New section of pathway under construction

Aug 2014. Work is underway on the new pathway between Tollard Drive and Grange Road West. A section of the old road will be re-used for the path. There will also be 2.0m wide shoulders on the roadway for high-intensity riders. Cycling South met with the Project Manager is August to look at options for extending the path further east past the fire station. The Department of State Growth has agreed to consider off-road path options along the Grange Road West alignment as part of the planning for the last stage of the project (East of Pass Road intersection through to Droughty Point Road).

April 2014. Work is well underway for the upgrade of Rokeby Road including the Pass Road/Tollard Drive intersection but no provision has been made for a minimum width (2.0m) multi-user path through the Rokeby residential area between the Rokeby fire station and Diosma St. The Rokeby Road corridor forms part of an arterial bicycle route connecting new subdivisions at Oakdowns, Glebe Hill and Pass Road as well as existing residential areas in Rokeby. A multi-user pathway in the median between Grange Road West and Rokeby Road would provide a good quality, safe and unobstructed active transport route for mobility scooters, prams and people walking or riding bicycles. 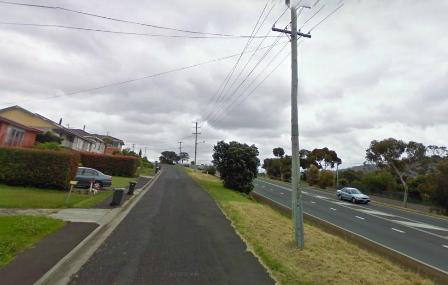 March 2013. Bicycle Tasmania wrote to the Minister’s office in November 2012 about the path omission between the fire station and Diosma St. As a result Cycling South was invited to present at the Parliamentary Standing Committee on Public Works on 16 November 2013 where the issue of upgrading a roadway for drivers but not upgrading facilities for active transport (walking, riding, scooting, etc) was raised. DIER’s view was Grange Road West roadway or the footpath was adequate but neither of these options are satisfactory for an arterial path. The footpath is narrow with driveway crossovers, and often blocked by rubbish bins or overhanging vegetation etc. The roadway is not a suitable environment for mum’s with prams, children or novice riders etc.

In March 2013 Cycling South received this response from Minister for Sustainable Transport's office:

May 2011. DIER has released concept plans for the upgrade of South Arm Hwy and has commenced detailed planning. The road is to be upgraded to 2 lanes in each direction with stage one focused on the area around the intersection at Pass Rd and Tollard Drive with Rokeby Rd. A concrete multi-use path is included in the plans to replace the existing hotmix path between Buckingham Drive, Howrah and Morrisby St, Rokeby. Cycling South and Bicycle Tasmania met with DIER officers in May 2011 to review the plans. The missing section of cycleway in front of the Howrah Gardens centre is included in the plans for stage two of the road upgrade but DIER indicated it will be the responsibility of Clarence City Council to upgrade the rough and bumpy hotmix path between Oceana Drive and the Howrah Gardens Centre. The plans also indicate a multi-user path along Pass Rd to connect between Glebe Hill Estate and the cycleway along Rokeby Rd. Issues identified by Cycling South and Bicycle Tasmania at the meeting include:

We will meet with DIER again once the planning progresses.

Feb 2011. The Clarence Bicycle Advisory Committee did a ride in January to look at what was required to provide for cyclists using this corridor. The committee would like to see the existing Howrah to Rokeby cycleway upgraded, including the missing section by the Howrah Garden Centre.

Sealed shoulders on the upgraded Rokeby Road is desired for commuting and training cyclists and a multi-user path alongside to cater for families on bikes, people walking or pushing prams.

April 07. GHD Consultants have been engaged by DIER to look at options for improving traffic movements around Rokeby and Clarendon Vale. CyclingSouth attended a briefing for community representatives and gave feedback on a preferred option which would best serve cycling movements through the area. We recommended an upgraded Rokeby Road with designated bike lanes and signalisation at intersections.
back to top